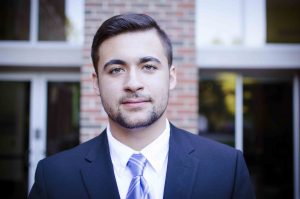 Carolina Native Service Scholar and citizen of the Lumbee Tribe of North Carolina, Dylan Brooks, studied abroad in Beijing and Shanghai in the People’s Republic of China as well as Ho Chi Minh City in Vietnam last spring from May 15-29, 2016.

Brooks traveled as part of a Global Immersion Elective program led by Dr. Larry Chavis, assistant professor of strategy and entrepreneurship at the Kenan-Flagler Business School. While there, Brooks traveled to Beijing, Shanghai, and Ho Chi Minh City to study the emerging markets of China and Vietnam, in addition to studying the ways in which their governments and cultures affect their economic development. Daily, he visited corporate offices and engaged in insightful conversations with company executives in order to gain an in-depth look at how all the operations of a business are affected by unstable economic and political climates.

Background on Global Immersion Electives: Global Immersion Electives are intensive study abroad programs that consist of in-class sessions at UNC throughout the latter half of the spring semester and then an immersive two-week excursion into the cities and nations that you have been intensively learning about in the traditional classroom setting throughout the spring.

Brooks admitted that at the time of the trip, he was a first-year student whose business knowledge largely consisted of reading the Wall Street Journal and the business prerequisites he had taken. Thus, getting the opportunity to listen to CEO’s and other employees present to his group about their business strategies and challenges they often face helped to transform into reality everything that he had been studying and trying to grasp in a traditional classroom setting into life. This blend of personal and professional development combined, creating a truly life-changing experience Brooks will cherish and draw from forever. Brooks reflected by saying, “I have truly developed a stronger grasp of the fundamentals of international business and how the Chinese and Vietnamese economies function and the strengths and weaknesses of their economic systems.”

Brooks is a student of the Assured Admission Program in the Kenan-Flagler Business School, majoring in Business Administration. Upon graduation, he plans to work as a Business Analyst in hopes of furthering the development of his analytical abilities and general understanding of the various components of corporations and how they are intertwined.

Later, he plans to pursue a Masters in Business Administration followed by ten to twenty more years of employment in the corporate world.

Brooks’ ultimate goal is to assist Native Communities across the state with financial management and economic development. He understands that in an increasingly competitive job market, it is crucial that tribal members have as many opportunities as possible to achieve success. He sincerely hopes that his efforts will create even more opportunities for Native People to thrive. “In order to fulfill this mission, it is critical that I gain top-notch experience from challenging positions in the corporate world and a great graduate level educational experience,” said Brooks.

The American Indian Center is extremely proud of the personal and academic advances that Brooks has made thus far. We look forward to witnessing the many other accomplishments that have yet to come.