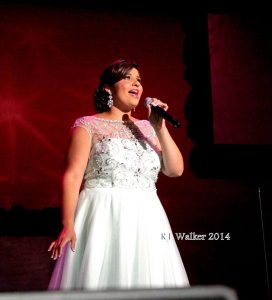 The Miss Lumbee Ambassador serves the Lumbee People and acts as a representative for the Lumbee Tribe. Miss Lumbee’s poise, intellect, and tribal pride show wherever she goes conveying to others the Lumbee way as she acts as an image for Lumbee People. In addition, Miss Lumbee has a platform in which she uses to focus on the betterment of the tribe as a whole.

This year’s Miss Lumbee is focusing on Education and Increasing College Attendance Rates of Lumbee Students. She plans to do so by working hands on with middle school students to instill in them the importance of college as well as teach skills and methods that will improve their outcomes and probability of attending college. She says, “Preparing for college needs to start before a student enters high school because the first day of high school matters. Working with middle school students to teach them the fundamentals of preparing for college and exploring career options allows the students to soak everything in and become accustomed to the process rather than being thrown into it upon entering high school.”

Miss Lumbee plans to work with the Public Schools of Robeson County as well as Title VII Indian Education to implement the program and gather as many middle school students as possible. Miss Lumbee hopes that her program, Lighting the Way, will be adopted and implemented in the years to come in order to create a continuous cycle of preparing Lumbee students for college early and improving, not only college attendance, but inevitably high school graduation rates. She wants to help Lumbee students be better assets to the Lumbee people.

Candice Noel Locklear serves as the Office Manager at the American Indian Center at UNC Chapel Hill, since August 2013. She is a member of the Lumbee Tribe and is originally from Shannon, NC. She is the daughter of Michael and Denise Locklear. She holds a Bachelor’s degree in Psychology from the University of North Carolina at Chapel Hill. During her undergraduate career, she served as President of the Carolina Indian Circle, Vice President of Alpha Pi Omega Sorority, Inc., and Director of Unheard Voices. Currently, she is pursuing a Master’s degree at the UNC School of Social Work. Candice says that while working at the American Indian Center, she has learned that our work not only creates opportunities for students on campus, but also for all the tribes and tribal organizations in North Carolina. She also considers the AIC to be an integral part in her success as it provides resources, encouragement and guidance towards her life goals.

History of the Miss Lumbee Pageant:

In 1968 the Lumbee Regional Development Association (LRDA) was created to provide services and improve quality of life for the Lumbee Indian communities in Robeson, Hoke, and Scotland counties. The Miss Lumbee pageant and ambassadorship were also created in 1968.