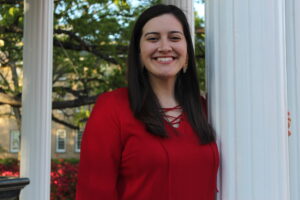 Brooklyn Brown, a member of the Eastern Band of Cherokee Indians, grew up in the Birdtown community of Cherokee, North Carolina. She is a recent graduate of the UNC-Chapel Hill Class of 2020, and double majored in both English and Media & Journalism with a focus in Editing and Graphic Design.

During her time at UNC, Brooklyn was an extremely dedicated and beloved member of both the UNC Carolina Indian Circle, serving as the Culture Co-Chair, and the Alpha Pi Omega Sorority, Inc. serving as the Secretary, Historian, Vice President, and Keeper of the Flame! She attended and assisted at all events held by these organizations, and furthered her graphic design skills by helping the Carolina Indian Circle with designs for things such as T-shirts for their various events.

Brooklyn treasures her time spent at UNC, and fondly thinks back to the time spent with her sorority sisters as well as life with her amazing roommates, Darla and Celia. She also mentioned that she spent a great amount of time watching her brother, Noland Brown, in both of his Football and Wrestling games, always being an avid supporter.

After graduation, Brooklyn first decided to work at Harrah’s Cherokee Casino resort, where she interned in the past in the Marketing department, but faced some delays due to COVID-19. While waiting, a talk with her mother inspired her to pursue a masters degree in something that she had always held a passion for, Cherokee History.

When starting out her applications to graduate school she had originally planned on focusing only on graphic design programs, and was very interested in Western Carolina University due to its credentials and its close proximity to home. She said that Western Carolina is practically in her backyard, and spending four years five hours away from home made her realize how much she missed the mountains and her family and would like to stay close. She noticed the Cherokee Studies program after doing further research into WCU and decided that’s what she would like to do.

Aside from graphic design, Brooklyn also partakes in art, journalism, and writing, all centered on Cherokee cultural expression. She is extremely passionate about her tribe’s cultural preservation and revitalization and is interested in how digital humanities can fit into that. She said that her involvement in the Cherokee Studies program, which is a MA in History, will strengthen her knowledge of Cherokee history and culture.

Brooklyn just finished her first semester of graduate school at Western Carolina University, and she says her first semester has taught her that a history major can teach a lot about the significance of the past and how to analyze and research it to inform our present and future. Through this, she has gained a new interest in cultivating her abilities as a historian.

For after graduate school, she has a few ideas in mind for what she would like to do. She would like to work for her tribe in marketing and tourism or preservation, wanting to find ways to raise cultural awareness and express Cherokee culture. She is also interested in working for a university such as WCU or UNC, either for the Cherokee Center or the American Indian Center, or as a professor. She has also thought about pursuing a law degree as her research has increased her passion for Indian law, and also expressed interest in Media law, as she took a class in the subject while at UNC.

She is currently working as a freelance graphic designer, writer and bead worker. She has worked on a lot of various things, such as logos and t-shirt designs, and she says that this is something that she can see herself doing forever. 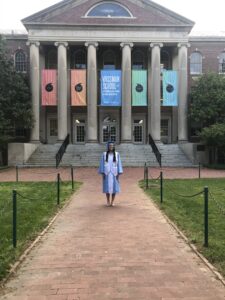 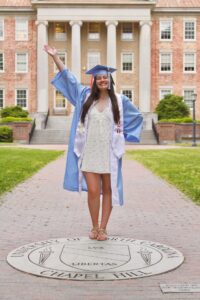