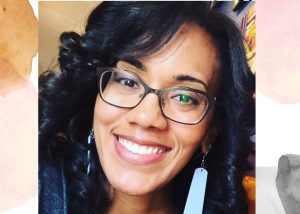 Tonia Jacobs Deese is a citizen of the Waccamaw Siouan Indian Tribe and is a double Tarheel who first graduated from UNC in 2003 with a double major in Psychology and Political Science. Tonia said she majored in these two polar opposite majors because she wanted to either work with mental health or go to law school. Overall Tonia knew that she wanted help people for the rest of her life. While at UNC Tonia was a part of the Carolina Indian Circle, ACES, Alpha Pi Omega Sorority Inc. and was a flag girl for the band her senior year. She also attended the Summer Bridge Program before her freshman year and worked as a counselor for Project Uplift during her summers at UNC.

Tonia, like most freshman, was ready to fly the coop, but soon found Carolina to be both a culture shock and an academic shock much like other Native students. Attending Carolina Indian Circle meetings and being a part of the sorority is what she credits as being her “home away from home.” Tonia was the only member of her tribe at UNC at the time but still found a sense of community in the organizations she was a part of that kept her at the university.

Three years after her undergraduate career, Tonia returned to UNC to complete her MSW at the School of Social Work. The three-year gap served as a way for Tonia to discover what she wanted to do for her profession and what drives her in life.  A cool part of her journey is that she fell into social work, before doing additional research she was not even exactly sure what an MSW was. But, during those three years she did not lose sight of her desire and passion to help others. Tonia chose to attend Carolina for her MSW because she felt like the community was much more welcoming to her and she felt comfortable here. Although there was only one other American Indian student that she was aware of in the program, she still felt that she was understood as a person and taken care of by staff and faculty in her department.

Since completing her MSW Tonia moved to Charlotte twelve years after she graduated and is currently living there with her husband and toddler. After she graduated from undergrad she stayed in the triangle because she continued to find a sense of community with people she graduated with, knew from church or attended Pow Wows with.

Her work since graduation has included many transitions, she started with child welfare in home services. After leaving child welfare she started to work with mental health. Now Tonia is a part of the faculty at the School of Social work and is a part of the clinical faculty. She trains, teaches and creates curricular development for the child welfare workers. Last year, she began to work part time serving as an outpatient mental health professional for teenagers and adults.