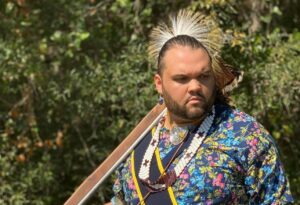 Ryan Dial-Stanley, from Kernersville, NC, is a member of the Lumbee tribe and graduated last year from UNC with a Bachelors of Science in Clinical Laboratory Science and a minor in American Indian and Indigenous Studies. Before graduating, Ryan was a beloved member of the Carolina Indian Circle, serving as the Co-chair of the Powwow Committee and helped lead amazing annual Powwows. Ryan has actually been involved with the UNC Powwow for years, attending it with his family ever since he was 5 years old. Additionally, Ryan was also the President of the Gamma Chapter of Phi Sigma Nu Fraternity, Inc, as well as the Treasurer, all of which showcases his dedication to his cultural roots and love for the Native community on campus.

When asked about his decision to major in Clinical Laboratory Science, an extremely rigorous and competitive field, Ryan talked about how he was fortunate enough to hear about the major from a fellow Lumbee Student. They met in high school and knowing of Ryan’s love for science and academic prowesses, he recommended the major to him. He thanks the Native community for helping lead him to where he is today, and hopes to pay it forward and tell other Native students that are arriving at UNC about all of the opportunities that he had so that they have a chance at them as well.

Ryan is currently a Medical Lab Scientist at the UNC Medical Center in the Core Laboratory. He is also obtaining a Masters degree in Clinical Lab Science from UNC, with the purpose of advancing in his professional career. He is an amazing example of what a Native student is capable of and we are looking forward to seeing what he accomplishes next!