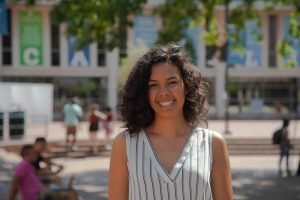 Ashton Martin, a senior at UNC from Roxboro, NC, and a member of the Sappony Tribe, has made a significant mark upon UNC’s campus with her role as Student Body President. She has been involved in student government since her first year, but noticed the lack of diversity within the leadership roles. She has continued to make an effort to increase diversity within the executive branch to this day and also strives to increase advocacy for smaller communities and organizations.

However, being Student Body President wasn’t something that was always on Ashton’s radar. It wasn’t until election season began to start that she thought about running, becoming drawn in by the opportunity to create change. She knew what it was like being part of overlooked groups, as both a Native American and a woman, and is actively working to bring more attention to all marginalized groups on campus.

Martin, aside from being Student Body President, has also served as the Co-Chair of the Academic Affairs committee in Undergraduate Student Government, served on the
Thrive@Carolina Advisory Board, and was also an Executive Assistant to the Vice President. Her main hope is to be remembered as a person who has listened and tried to make changes in a positive way, making sure that she stands as an unwavering advocate for all students. She has stated that she wants to make Student Government “a platform students from all over campus can trust to empower and uplift their voice,” and is never afraid to stand up for what she believes in, even walking out of class and standing on the steps of Wilson library to protest police brutality earlier this year.

The strong stances that she has taken just show how she is already blazing a new path at UNC, and her legacy will live long after her time at Carolina.