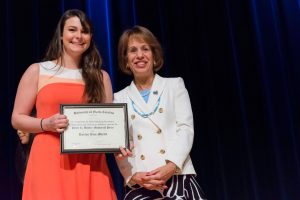 Karine Martel, citizen of the Métis Nation, graduated on May 8, 2016 with highest honors and distinction in American Studies. She received a Bachelor of Arts in American Indian & Indigenous Studies and Political Science with a Minor in Environmental Studies.

During Karine’s time at Carolina, she consistently excelled academically. Karine was a Morehead-Cain Scholar, which financially covered all expenses for her four years of undergraduate study at UNC-Chapel Hill and equipped her with professional development trainings.

In recognition of her academic achievement, Karine was honored with The Peter C. Baxter Memorial Prize in American Studies from Chancellor Folt at the 2016 Chancellor’s Award Ceremony on April 20, 2016. This award is given each year to one undergraduate senior in the Department of American Studies, who best exemplifies Mr. Baxter’s intellectual excellence, personal warmth, and contribution to the American Studies Program.

Next year, she is planning to complete a Masters in Native Studies with a focus on Métis Studies at the University of Manitoba.