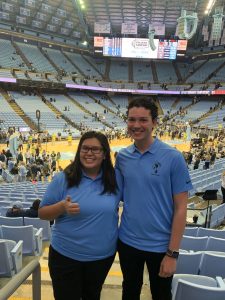 Juanita Paz-Chalacha and Zachary Richardson are both undergraduate students at UNC-Chapel Hill.

Juanita Paz-Chalacha is a first year at UNC-Chapel Hill and is from Cherokee, NC. She is a member of the Eastern Band of Cherokee Indians. She plays the flute in the UNC Marching Band and her musical journey began in middle school, in the 6th grade, and she began marching in 7th grade. In her senior year, she transferred from her local high school to the Music Conservatory with the UNC School of the Arts, a school known for providing top-tier academics as well as providing an immersive conservatory training in the arts. There she studied music for the marching band. At first, she said that the transition and the culture shock from the conservatory school had a really big impact on her, as the environment was much different than the one back home. However, Juanita persevered over these various obstacles and graduated, with music still being one of the main passions in her life as well as getting a position at UNC’s Marching Band. Playing the flute has let her express herself as well as letting her further appreciate music in general, and some of her favorite genres include Alternative/Indie music as well as easy listening

Being so musically-inclined, Juanita also likes to practice playing the ukulele in her free time. She is also interested in the American Indian and Indigenous Studies major here at UNC, and is considering adding that on as a double major. As a first-year, she still has plenty of time to decide on what exact path she wants to take after graduation but she has stated that she wants to work closely with individuals to better the outcome of their living situation.

Zachary Richardson is a junior at UNC-Chapel Hill from Rocky Mount, NC. He is a member of the Haliwa-Saponi Tribe. His musical journey began when he was 5, with the piano, and in the 6th grade he picked up the clarinet, and continued on with the instrument throughout middle and high school. Due to his musical capabilities, he has been able to participate in various music competitions, was graded and selected to be in the honor band at his school, and even advanced onto the state level in the 8th and 12th grade. His main concentration throughout middle and high school has been concert band, but he is now in the marching band at UNC (playing clarinet), stating that they are very different due to how the marching band aims at encouraging the athletic teams while the concert band is aimed towards classical performances for an audience.

Music serves a big purpose in his life, saying that he uses it as a way to relieve stress as well as an outlet. Besides his involvement in the UNC Marching Band, Zachary is also involved in the Carolina Indian Circle and is also a brother of Phi Sigma Nu Fraternity, Incorporated. He is a Chemistry major and is minoring in Spanish for the Medical Professions, and he has recently shadowed a pharmacist in his hometown, watching them do case by case analysis. This has further sparked his interest in the pharmacy field, and his future aspiration for after graduation is to do clinical research in a pharmaceutical company.